A bit of our history

A meeting of bowlers was held in the Mawelltown Hall on the 14th may 1884 with Bailie Hunter in the chair. It was unanimously agreed to form a Club to be called Baxter Park Bowling Club.

James Robertson was appointed President and held that office for the first three years and John Young as Vice President. Secretary and Treasurer were John Lumsden and William McIntosh respectively. Some of the early rules were as follows. a) entry money was filed at 1/- b) tickets were to be printed and each member was given a ticket when his entry money was paid. In total 78 tickets were sold. c) members were required to show their ticket before going on the green. d) No member was to occupy the green for more an hour at a time if others required on.

23rd August 1884-The opening of Baxter Park Bowling Green by Provost Moncur.The next record of a match being played on the green is the opening game on the 16th May 1885 for which the lord Provost supplied the refreshments. He also furnished a silver medal for the competition.

4th July 1885 The first match against another club on Baxter Park green was Arbroath Abbey.

15th August 1885 The first match against another club on their green was Balgay.

29th August 1885 An away match against Newburgh was turned down. The reason being the season being too far advanced.

In the provost's speech he refers to the funds being provided for the construction of the green. These funds were provided by the Provost himself.

Members of the club were drawn from Five existing Clubs-Excelson, Eagle, United, Camperdown and Maryfield. The rough and tumble sort of way referred to in the Lord Provost's speech was how the Five clubs played on the lower park. Starting at the west side and playing to the east side, equal to about eight ends, and turning around playing back again until the game was finished. Each club had it's own "pitch". These were cut by a scythe.

5th May 1923 A new pavilion, which is the centre of the now existing clubhouse, was opened by Bailie Burst in the absence of Lord Provost Spence. This replaced the old bowls house which was too small. The member's subscriptions was increased by 5/ to a £1 to cover the cost of the upkeep of the Pavilion and green.

12th January 1926 - Letter received from parks and Cemeteries giving members of the club full use of the Pavillion at all times thus remaining the restrictions of the use of the pavilion.

13th October 1926 - Following numerous complaints to the parks Committee on the unsatisfactory condition of the green and which Mr Macrae, Parks Superintendent admited were just grievances, a letter was received from the corporation giving the club a six year lease of the green as it stood and that the club would put the green in playable condition and maintain it to the satisfaction of the Parks Superintendent. Mr Phin said the Committee would be well rid of it, The cost to the club for the repair of the green was £53.

April 1963- First extention to the pavilion was completed which more than doubled the original floor space and provided window viewing of the green along the whole front of the clubhouseas at present. The cost of £420 for the materials for the extention was paid by the club. The labour was voluntary by club members.

Around this time a small extension was added on the end of the club. Since 1982 there has been no signifigant changes in building terms but there have been upgrades to the kitchen and bar areas and also decoration has been ongoing such as new president and championship boards etc;.

Most of the decoration of the club has been done by club members. Notably the fabric committee, but special mention must go to Pat Kearnan who over many years has spent long hours doing all sorts of jobs.

Over the years there have been many characters in the club. Who could forget " Junior Buchanan" leading out his Arabs in his full regalia before the annual Dundee v United supporters challenge game, or Earls late return from Arbroath!

The bowling side of the club is obviously the main priorty and over the years the club has had many successes and many fine bowlers, but enjoying the game has to be the main objective and i think that certainly applies at Baxter Park.

The club also boasts a healthy and successful social side with entertainment on Saturday nights throughout the year. during the period between closing and opening days there are many events organised such as Bingo, Quiz and Race Nights, and also a very popular Line Dancing Night, all of which bring in much needed revenue to the club. Thanks must go to all the members who organise these events.

Many fixtures have been added over the years , but sadly one of the most popular games, against Aberdeen B C Grandholm was ended when the club folded, but there is still an annual game against Leslie B C and hopefuly more can be fixed up.

The Centenary year 1984 with Walter Paterson as President was very successful with the main highlight a Centenary Dinner Dance.

starting off the "125" year there was also a very successful dinner dance in the Queens Hotel, which was only made possible by hard work don by the "125" steering committee.

During the year there will be events organised and i am sure they will be well supported by all the members!

Lets make the "125" celebration year a very enjoyable and successful one.

Some pictures associated with James Towns a member around 1900 sent in by Charles Towns from USA, James is his Great Great Grandfather..

He was the winner of Baxter Parks Presidents Club trophy 1891

Some members posing for our 125 official photo 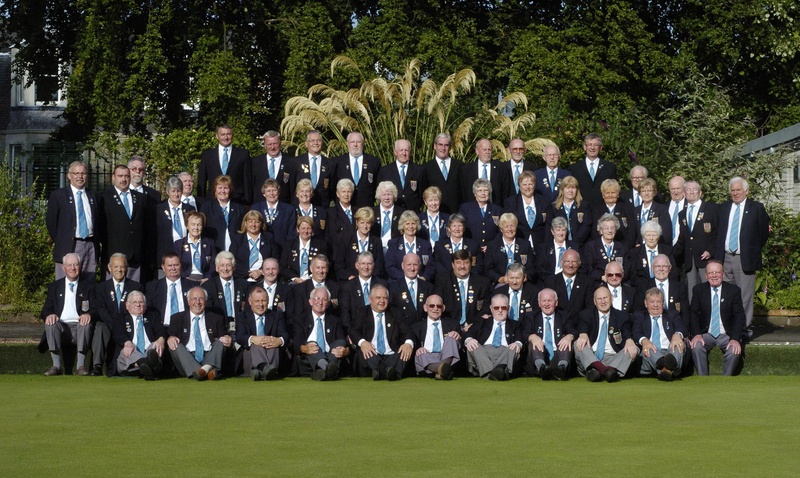 We are celebrating our 125 Anniversary

Pictures from our dance at the Queens Hotel